Bitcoin and Other Cryptocurrencies Rally, Pushing the Market to $2 Trillion 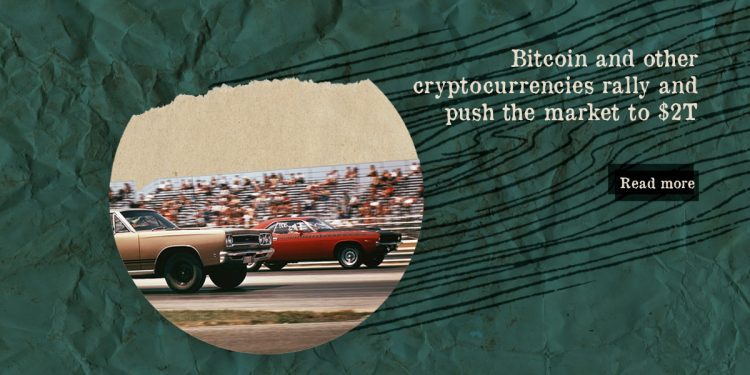 Over the past weekend, the global cryptocurrency market reached a total value of $2 trillion for the first time since May. The momentum of crypto has been due to the sustained increase in the price of Bitcoin and other cryptocurrencies.

Some analysts have suggested that BTC is displaying the biggest buy signal since April of last year. The cryptocurrency’s weekly close performed above both the 21-week and 200-day moving averages (MA).

The remarkable momentum experienced in the cryptocurrency market to surge above $2 trillion has been spurred on by other currencies as well. Binance Coin, whose market capitalization is in the order of $71.4 billion, raised its price by another 4% on Monday to hit $424.60, according to Coinbase.

In the meantime, Dogecoin was trading at $33.6 cents at 4:16 p.m. (ET) on Monday, maintaining a market capitalization of $41.12 billion. Since Spring, when the crypto market peaked, the memecoin has faced a number of hurdles and tremendous volatility.

The pressure on the price of bitcoin, and other cryptocurrencies, in recent weeks, has caused a bullish streak. This is particularly due to China’s tax controls on mining, intensive production and transaction verification of the current BTC supply.

Although, equity analyst Vicent Ventures claims that China will not be able to stop Bitcoin, while the U.S. simply does not want to. The United States is more concerned with the potential advancement of the digital yuan overthrowing the dollar as the primary currency of international payments.

A Bitcoin regulatory wave is sweeping the world. Last week The U.S. Senate passed a $1.2 trillion Infrastructure bill that will now be debated by the House of Representatives, despite its rejection by broad swathes of the industry for the lack of clarity in its content.