Bitpanda’s Valuation Hits $4.1B After Netting $263M in Series C Funding Round 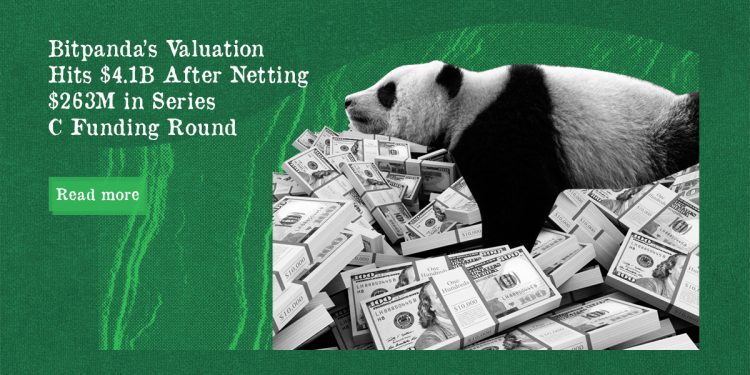 Bitpanda, an Austrian crypto trading platform, has more than tripled its valuation in five months. Earlier today the platform was valued at $4.1 billion after its Series C funding round raised $263 million. Reportedly, Valar Ventures spearheaded this investment round alongside Alan Howard and REDO Ventures. Existing investors such as Leadblock Partners and Jump Capital also took part in the financing round.

According to the report, Bitpanda was worth $1.2 billion after its private financing round in March 2021. At the time, the company had managed to net $170 million. With the funds from the Valar Venture-led funding round, Bitpanda has now raised close to $500 million.

Explaining why Bitpanda decided to settle for private investments, the firm’s co-founder and CEO, Eric Demuth, signalled his dislike for fundraising due to its time-consuming nature. Fortunately, Bitpanda has a close connection with partners that have deep pockets. As such, doing the complete roadshow was unnecessary.

Demuth added that Valar Ventures and Bitpanda both intended to maintain their ongoing relationship and, as a result, the entire investment process was smooth.

Since Bitpanda launched as a crypto broker in 2014 the project has evolved into a well-rounded investment platform that lets people inject their money into a range of products. At the moment, the platform boasts 3 million users, making it one of the fastest-growing FinTech companies in Europe. While this growth is notable, Bitpanda has lofty ambitions that involve expanding into France, Spain, Portugal, and Italy.

Bitpanda is also seeking to license its technology with banks and FinTech startups. While the company has not yet disclosed any clients, it claims that several leading firms are already integrating its system, allowing them to offer crypto and stock trading seamlessly. As such, Bitpanda intends to edge out its competitors that include Revolut, Trade Republic, and eToro.

With the crypto market bouncing back from its mid-May crash, Bitpanda has positioned itself for expansion into other countries. Through this expansion, the platform can foster further crypto adoption, pushing crypto prices higher.

How LGBTQ+ and Black Americans Plan to Escape Financial Discrimination