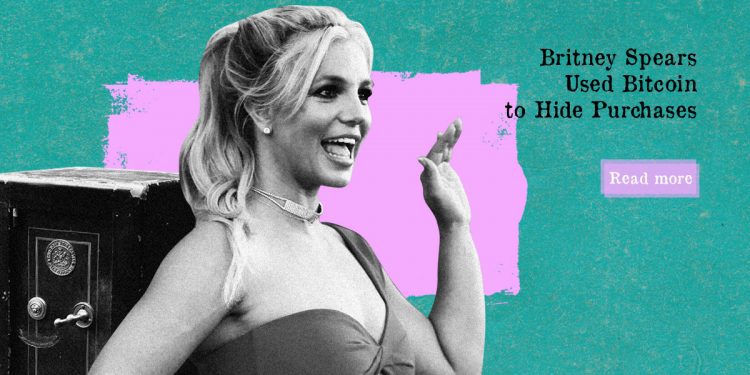 Banks and primarily governments work in tandem to restrict people’s ability to transact freely. While their motives are grounded in blocking bad actors, one cannot assume that tracking and babysitting each person is necessary to prevent “ifs,” because it infringes on privacy. Bitcoin is thus a buffer fostered within communities as a means to retaliate.

As reported by U.Today, Tess Barker and Barbara Gray, hosts of the Toxic podcast, which covers Britney Spears’ long-fought battle to have her conservatorship, which was imposed by her father in 2008, removed, revealed that Britney Spears had used cryptocurrencies. Moreover, sources say that Britney used bitcoin specifically to hide small payments from her father, Jamie Spears, in 2014.

What Does It Mean for the Crypto Community?

Using Bitcoin to hide her spending from her father is no different to how Bitcoin became a financial instrument on dark web forums such as Silk Road. While Bitcoin is slammed for facilitating illegal activities, it has proven to be a trusted instrument when governments and the legal system fail to defend their peers. Additionally, it helps to reinforce the hedge-against inflation narrative, based on the same arguments that the government’s actions are in the people’s disinterest and only serve those in power.

Bitcoin maximalists, and everyone connected with the crypto market, have confirmed crypto’s usability. One Twitter profile named Xavid Banana, said: “Has there ever been a better confirmation of its greatness?” while another user, Will McCormick, noted: “Bitcoin is Freedom.” Interestingly, Britney using bitcoin is the perfect example of crypto’s adoption, despite the recurring arguments stating that Bitcoin cannot perform currency functions.

The True Side of Crypto Believers

Although everyone supports Britney Spears’ use of bitcoin, the discourse within the community has deviated from the topic in question towards the value of Bitcoin. Discussion on Twitter emphasizes Bitcoin’s elongated importance, and whether it was wise of her to spend BTC in 2014 when it was worth $300. According to one Twitter user, she should have “saved it,” while other comments on Reddit note that “If she HODLed,” she would have been rich.

The crypto community further underlines the purpose of Monero for preserving privacy, with one Reddit user expressing “Oh Britney, use Monero.” The counterargument is that Britney used the most affordable cryptocurrency to confer herself the anonymity and privacy she sought. She wasn’t selecting crypto based on her ideals of what coin was better fundamentally; rather, she used crypto for its censorship-free functionality.

Interestingly, the community response has largely been that they resonate with Bitcoin differently to Britney, without considering the deeper implications that pushed Britney to seek to use Bitcoin. If Bitcoin is referenced as digital-gold and ideals of getting rich through crypto are permeating through the community, it is only normal then that users would recognize it as nothing more than a money-making speculative asset. Yet, for some, like Britney, it’s a tool for digital freedom.

Bitcoin might not operate and work as a currency because of the high amounts of fossil fuels involved, or its high volatility, but it functions as Satoshi Nakamoto intended. Britney’s BTC payments are an essential determinant reinforcing Bitcoin’s importance and place in our society.