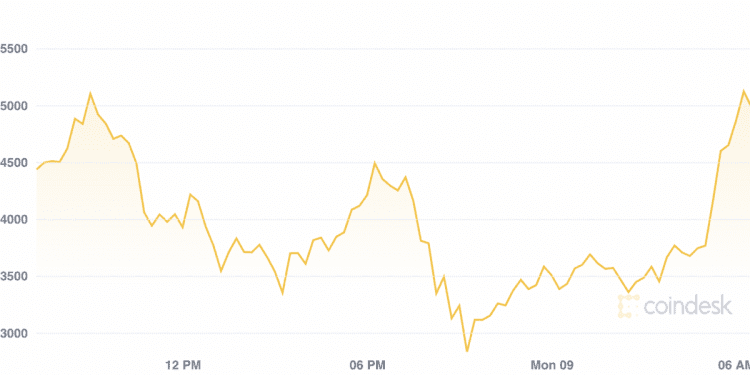 Cryptocurrencies are in rally mode as bitcoin held above $45,000 on Monday. Buyers were active ahead of a U.S. Senate compromise on tax-reporting requirements for digital assets. Crypto-related stocks such as Riot Blockchain (NASDAQ: RIOT) and Coinbase (NASDAQ: COIN) moved higher in a mixed day for the overall stock market in hopes for regulatory clarity.

Ether was also well bid above $3,000 at press time and is up 21% over the past week, compared with an 18% rise in bitcoin during the same period.

Bitcoin pierced the 200-day moving average for the first time since April 2020, which preceded a broad crypto rally. “With bitcoin crossing above its 200-day, we think bitcoin will rally strongly into year-end,” Thomas Lee, managing partner of FundStrat, wrote in a Monday newsletter.

Forward returns tend to be bullish for bitcoin after a successful break of the 200-day moving average. Technical charts suggest the next resistance will be around $50,000 to $55,000.

The “kimchi premium,” which represents the difference between bitcoin’s price on South Korean exchanges and the going rate on other global trading venues, is at a six-month low, according to data from CryptoQuant.

Typically a rising kimchi premium reflects trading frenzy in South Korea relative to the U.S. At times, a peak in the premium can precede a sell-off in bitcoin.

This time, the “kimchi discount” could reflect a significant decline in South Korean trading activity because of regulatory crackdowns.

Earlier this year, South Korea passed comprehensive cryptocurrency laws, which provided a framework for the legalization of crypto exchanges. In June, however, South Korea passed new legislation to increase supervision of cryptocurrencies. Banks have been reluctant to partner with crypto exchanges amid growing concerns about regulatory crackdowns and the financial risk of stablecoins.

The market share for ether, the native cryptocurrency of the Ethereum blockchain and the second-biggest overall after bitcoin by market cap, is rising rapidly and now represents 26% of all digital investment products, compared with just 11% at the beginning of the year.

Although bitcoin has also seen positive price movements in the last few weeks, the cryptocurrency continued to bear the brunt of the outflows, totaling $33 million last week.

Ether’s implied volatility dropped sharply last week as the cryptocurrency rallied nearly 30%. The sell-off in implied volatility was particularly strong on the short end of the historical term structure over the past few days, according to data from Skew.

Bullish sentiment is rising in the ether options market as call volumes increase relative to put volumes. Option traders are pricing in a roughly 30% chance of ETH trading above $3,500 by month’s end.

All digital assets on CoinDesk 20 ended up higher on Monday.