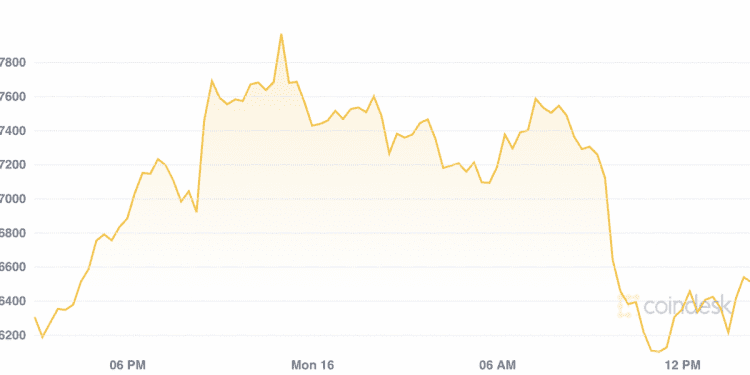 Bitcoin traded in a choppy range on Monday as buyers appear to be exhausted ahead of the $50,000 resistance level. The cryptocurrency was trading at around $46,000 at press time and is roughly flat over the past 24 hours.

On Monday, the total crypto market cap surpassed $2 trillion for the first time since mid-May, according to CoinMarketCap data. Ether and cardano are standouts in the recent crypto rally,  with strong rallies month to date, rising 26% and 62% respectively, compared with a 16% rise in bitcoin during the same period. XRP is also up 70% so far this month.

The rapid rise in crypto prices has some analysts expecting a pause. Katie Stockton, managing director of Fairlead Strategies, highlighted signs of upside exhaustion in bitcoin in her Monday newsletter.

Upside exhaustion signals could “support a brief period of consolidation as gains are digested and short-term overbought conditions are relieved,” Stockton wrote.

“Even though the trend has flipped bullish, a pullback is to be expected before continuation. This is because there has been declining volume with an increase in price,” Marcus Sotiriou, a trader at the U.K.-based digital-asset broker GlobalBlock, wrote in an email to CoinDesk.

Bitcoin miners have added more of the cryptocurrency to their reserves in the past few weeks.

“The reserves are now close to this year’s all-time high of May 9, recovering the outflows in June,” Jan Wuestenfeld, an analyst at blockchain analysis firm CryptoQuant, wrote in a blog post.

Miners “appear to be unimpressed by the most recent price moves (likely expecting higher prices),” Wuestenfeld wrote. “The fact that miners are not under pressure to sell their BTC at these prices is a testament to the health and resilience of the miners and the network.”

Total ether options open interest exceeded $4 billion last week, which reached a two-month high, according to Skew, a provider of data on cryptocurrency derivatives markets. The options market is bullish on ether after a decisive break above $3,000 last week.

Skew data also shows a decline in ETH options volume over the past few weeks, which coincided with short-term overbought signals. Option traders have assigned a 64% probability of ether remaining above $3,000 this month, which is near technical support.

Investors redeemed a net $22.1 million from cryptocurrency funds last week, the sixth consecutive week of outflows, even as bitcoin and many other digital assets rallied, a new report shows.

It’s the longest streak of outflows since January 2018, according to the report Monday by the digital-asset manager CoinShares.

Investors have seen an outflow of $22 million from bitcoin, even though the largest cryptocurrency has recently traded up to $48,200 from a low of $29,608 last month.

Last week, the volume of Internet Computer (ICP) on Coinbase went up significantly as the price rallied 50%, according to a report by the crypto exchange. Dogecoin’s (DOGE) volume on Coinbase also climbed higher as the price rose as retail investors became engaged again. Volume of FARM, the token of the automatic yield farming protocol Harvest Finance, rose 70%.

Meanwhile, volume in ETH on Coinbase continues to surpass BTC, with Aug. 7 being the most extreme, as the ratio of ETH and BTC volumes was 67:33.

Bitcoin and Other Cryptocurrencies Rally, Pushing the Market to $2 Trillion