Walmart Is Looking for a DeFi Expert to Join Their Team 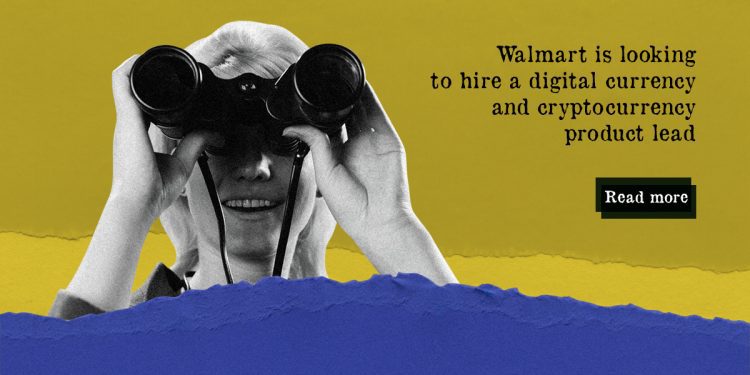 As the interest of mainstream businesses turns towards blockchain technology, Walmart, one of America’s biggest retailers, in terms of total sales, is reportedly looking for a ‘Digital Currency and Cryptocurrency Product Lead.’ The retailer’s website highlighted the duties of the new role, outlining that the individual will be responsible for identifying consumer and technology trends.

Apart from creating the overall vision for crypto products, the lead will also find digital asset partnerships and investments. Walmart had previously applied for a project similar to Facebook’s ‘Libra,’ which would presumably be the line for the new position’s occupant to follow up on.

The retailer had also utilized blockchain in its past for various non-financial purposes, including tracking the food and medicine supply chain. After nearly two decades, when its attempt to secure an American bank charter collapsed, Walmart has established a fintech branch called ‘Hazel,’ eyeing the massive consumer finance market.

What Does This Mean for the Crypto Market?

This is not the first time a major company has considered expanding its services into the crypto market. Prior to Walmart’s interest, Tesla, MicroStrategy and numerous other companies have adopted the emergent technology.

This latest step by American retailers will lead to the integration and formation of partnerships with crypto firms across the spectrum. Meanwhile, crypto experts suggest that many traditional businesses, retail or otherwise, will be more willing to jump on the blockchain bandwagon.

Earlier this year, in July, Amazon, the world’s largest e-commerce platform, published a new vacancy for a Digital Currency and Blockchain Product Lead. There has been widespread speculation that the company may be looking into introducing its own crypto token.

In May of this year, American tech giant Apple posted a job calling for crypto and blockchain experts to join the company for an alternative payments program. Since its launch, the company has maintained firm control on its app store payments. Interestingly, Apple has never accepted digital assets and has insisted that other catalog programs follow their rules.

Though these firms have not yet made any public statement regarding their entry into the crypto space, it’s surely a tell-tale sign of the growing interest in DeFi.

For now, many states in the U.S. have quite relaxed laws around the use of crypto. Such steps by massive firms like Amazon, and now Walmart, could help to catalyze mainstream acceptance and use of crypto assets. So, it would be fair to say that any such developments displaying a growing trust in the technology is a step towards a cashless future.